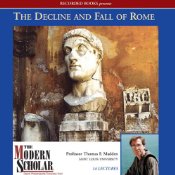 In the Audible Books Modern Scholars lecture series on The Decline and Fall of the Roman Empire, Thomas F. Madden takes on the question of whether or not Emperor Constantine’s conversion to Christianity was genuine. While this is in no way the main subject of the lectures, it is a fascinating question, especially in light of what followed on Constantine’s conversion: Christianity went from being an officially persecuted religion, embraced by 15% of the populace in 313 to being THE official religion of Rome, embraced by almost the entire Roman empire by the end of the fifth century.

Here is how Madden’s argument goes:

Constantine did not convert to Christianity to hold on to power or help the empire. Arguing for this ulterior motive–political expediency–doesn’t work because

Some object that Constantine was not baptized until he was on his deathbed. Madden argues that this actually provides evidence FOR the sincerity of Constantine’s conversion

SUBSCRIBE HERE to receive my latest posts and commentary by email.